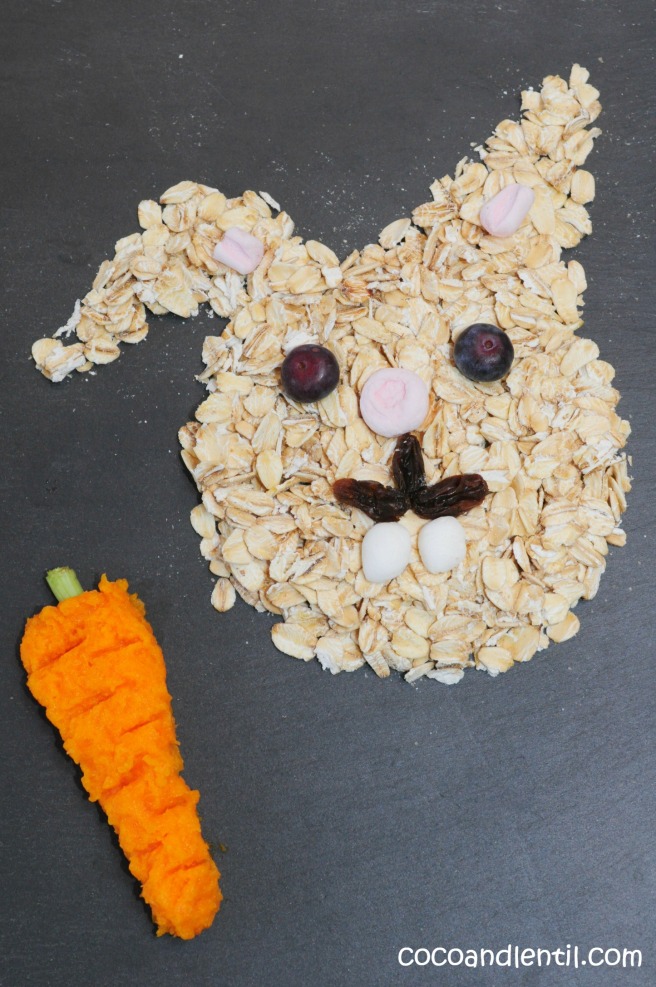 My mummy, papa and brother all put weird colourful things into their mouths when we sit down at the long wooden thing in our kitchen.  I just have milk – I love my milk.  Today mummy tries to put some very strange orange stuff in my mouth using a blue and pink thing, which she calls a spoon.  Mummy says the orange stuff is “baby carrot”. I really don’t like it and screw up my face in disgust.  Mummy says I should try a little more and before I can wobble my lower lip and threaten tears, she puts another spoonful into my mouth. I try to swallow it but it makes me gag and then it all comes back out again.  Ha! Mummy won’t try that again! 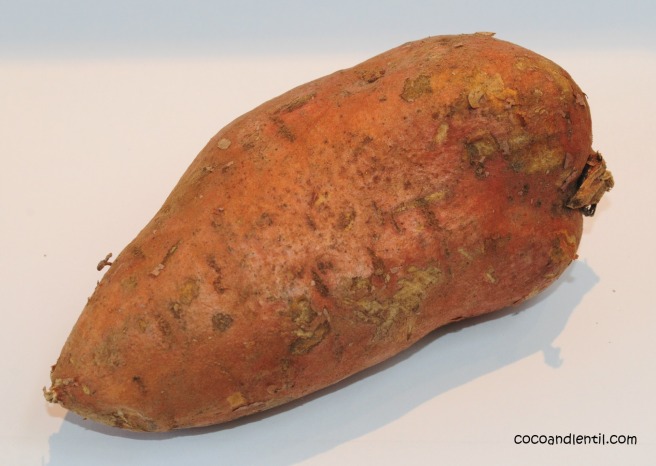 Oh no, mummy is insisting on putting weird stuff in my mouth again! Despite my obvious disapproval, there is more orange stuff today.  It tastes different to the “carrot” stuff, but is still yucky.  Mummy calls this new orange stuff “sweet potato”. She says Lentil liked the orange stuff when he was a baby. Well…mummy should know by now that I have my own mind, even though I’m only very small.  She also says that this stuff she calls “solids” or “food” will help me sleep better. I really don’t mind waking up at night for milk and I always smile at mummy when I do. So why all the fuss about this food business??

This new orange stuff also makes me gag and this time I not only wobble my lower lip, I cry very loudly with proper big tears.  It works, mummy gives me some milk! 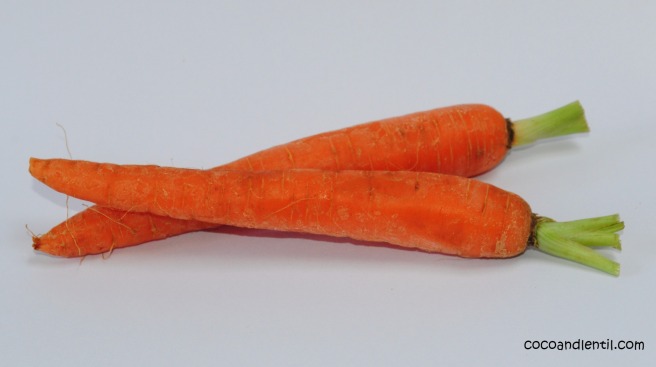 Even after all the tears yesterday, Mummy tries to give me carrot again today. Although it doesn’t make me gag as much as the first day, I still don’t like it.  I just want my milk.  I spit most of it out, knock over the little tub and throw the spoon thing on the floor.  I get it all over my face and hands and make as much mess as possible.  Mummy doesn’t seem to mind the mess: she has covered me in a big plastic thing with birds and flowers on it, which she calls a “bib”.  She even gives me an encouraging smile to get my hands stuck in! What do I have to do to get her to stop giving me this orange stuff??

OK, message received: no sign of any orange stuff today!  Oh no, what’s that? Some weird white and green stuff.  It is a little sour tasting and makes me blink and shake my head. Mummy says it is called “apple”.  I haven’t had any milk for lunch yet and am quite peckish so maybe I should try a little. Some of it falls back out landing on the “bib” thing, but Mummy says I have done very well.  I’m not sure if that is good: does it mean I have to have more?? 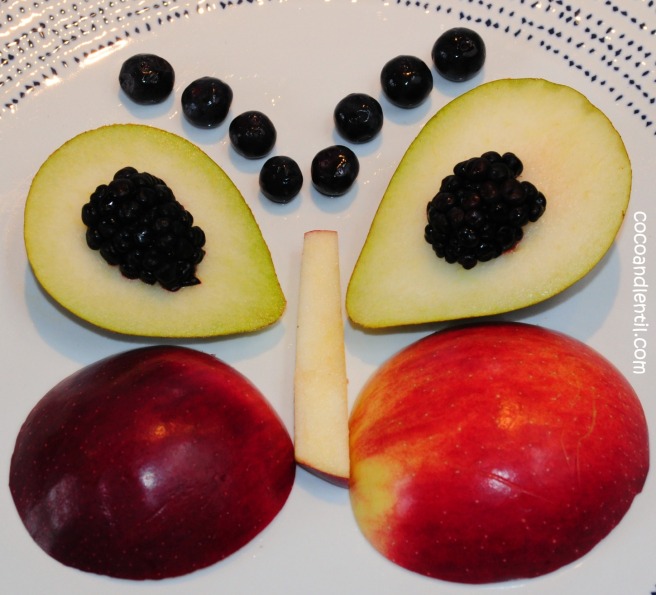 It seems it does mean I’ve to have more! New green stuff today.  Mummy calls it pear. It looks just like “apple” to me.  It tastes OK and I eat a little, but I still prefer my milk.

Uh-oh, it’s the orange stuff again today.  I don’t think mummy is going to give up.  I try a little to humour her.  It actually isn’t that bad.  It tastes sweeter than last time, more like my milk.  Maybe this food stuff isn’t so bad afterall and I still get to have my milk afterwards.  I do hate it when mummy is right though…. 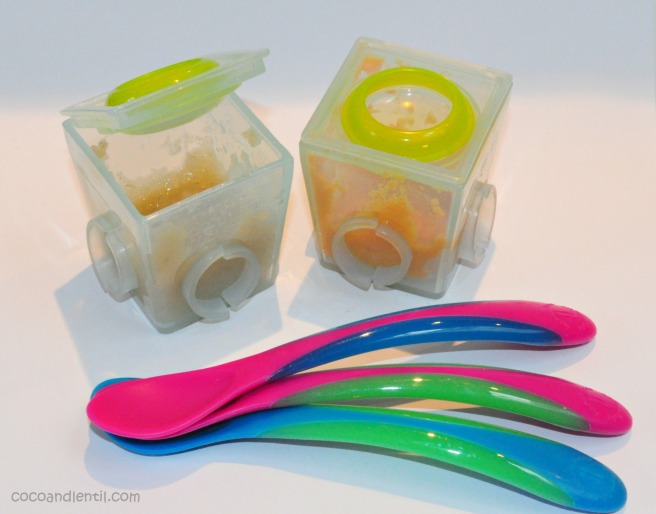 “Every child is different”.  This certainly rings true when it comes to weaning.  I started Lentil on carrot puree and although he turned his nose up at it a little on day one, he has devoured almost everything I’ve put in front of him since! Coco, on the other hand, is taking her time to adjust to solids.  I panicked a little on day three and wasn’t sure she was swallowing anything; her bib was covered in orange puree!  However, it is a big developmental leap so one can understand why their little bodies and minds need time to adjust.  You just have to stick with it and introduce a variety of tastes.

I also learnt that my little daughter seems to have inherited her Papa’s sweet tooth (not that she actually has any teeth yet)!  Once I started adding a little milk (you can use breast milk or formula) to the purees, she gobbled them back.  If you’ve ever tasted breast milk (I have thanks to airport security), you’ll know just how sweet it is – I was really shocked! Anyway, it seems to do the trick so I’m sticking with it for the moment….. 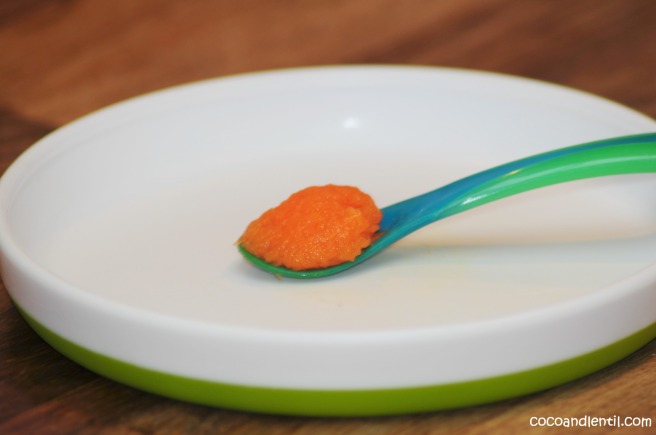 Peal and slice 4 sweet baby carrots and steam over a pan of boiling water for 15-20 minutes until soft. If you have a microwaveable steamer, steam for about 4-5 minutes.  These really are fantastic and not expensive at all.  Add a knob of unsalted butter to the hot carrots and purée with a hand-held blender.  Add a little of your little darling’s normal milk, if needed, to achieve a really smooth puree (or to satisfy that little sweet tooth!).

Peel and chop one large sweet potato. Steam in a microwaveable steamer for 6-8 minutes until soft.  Alternatively, place in boiling water, bring back to the boil and cook for about 15 – 20 minutes until soft. Add some unsalted butter to the hot potato along with 1-2 tbsp of your baby’s milk or some of the water from the steamer / pot.  Mash with a potato masher or purée with a hand-held blender.

Peal, core and chop a Bramley or other dessert apple.  Cook on medium heat in a pan with 2 tbsp of water for about 8-10 minutes.  Stir occasionally and add more water if needed.  Once soft, puree with a hand-held blender.

Peal, core and slice 2 conference pears.  Place in a pan with 2 tbsp of water and 1/4 tsp of ground cinnamon.  Cook on medium heat for about 6-10 minutes  (depending on the ripeness of the pears) until soft.

Tip: You can freeze the puree in ice-cube trays and cover with a freezer bag. Just pop a cube out as and when you need it. As your little ones get used to solids, you can increase the number of cubes you give them. Alternatively you can use little freezer-proof pots and label each with the date and contents.